Suicide has become a significant general medical condition and its occurrences seem to have increased in Pakistan as of late. Available and accessible statistics show that most suicides occur among youngsters (particularly single men and married women) who are under 30 years of age. Hanging, consumption of insecticides and the use of guns are some of the most well-known ways of attempting suicide. Relationship issues, domestic violence and the ever-growing poverty faced by most of the country’s population appear to be the most well-known explanations behind suicidal occurring. It is high time that the civil society as well as mental health experts take the initiative to work with the government and non-governmental organizations to address the causes of suicide, raise awareness about mental illnesses and ensure the provision of adequate psychological health services in Pakistan.

According to statistics provided by the World Health Organization (WHO) in 2008, deaths by suicide across the world were estimated to be around 782,000. However, the WHO was only able to collect records from approximately half of the countries in the world[1] while Pakistan reported no suicide mortality data to the WHO.[2] No official numbers are available still because the national suicide rates are neither known nor included in the annual mortality statistics.[3,4] Studies and research on suicide and attempted suicide in Pakistan are also inconsistent; only three investigations have been led into matters involving suicide while six examinations have been conducted on attempted suicide.[5-8] Ahmed and Zuberi have assessed the rate of suicide in the city of Karachi from 1959 to 1963 to be at 0.72 per 100,000 occupants and from 1974 to 1978 at 0.11 per 100,000 occupants.[6]

Despite seemingly low rates, suicides occur across the globe, with evidence suggesting that the real suicide rates may be much higher than officially reported figures.[8] Evidence also suggests that suicide rates may steadily be increasing.[10]

The margin between actual and official figures presumably exists on the grounds that there is no efficient observation framework and the figures are gathered from the information provided by police records which generally underestimate and underreport actual figures.[8,11] The investigation into suicide and attempted suicide is further confounded by a variety of socio-legal perspectives, resulting in an underestimation of figures. Subsequently, the extent of the issue is hard to determine.

Suicide in the Socio-Legal Context of Pakistan

In Pakistan, a complex interface of socio-cultural and legal perspectives surround the act of suicide. The society views suicide as an offensive and dishonourable act and often hides it from the authorities. Families in which a member has attempted suicide are afraid of facing social repercussions and excommunication.[8] People who suffer from mental illnesses are reluctant to seek psychiatric help due to the stigma attached.[12] Behaviours or disabilities which can draw negative attention towards an individual or his or her family are often considered stigmatizing.[13] According to a report published by the WHO, the population of Pakistan has very poor access to psychiatric facilities and treatment.[14] For a population exceeding 200 million, there are only 343 registered psychiatrists, 478 psychologists and 3,145 social workers in Pakistan.[14] Most psychiatric services are only available in urban settings when most people live in rural areas. Studies show that most suicides in Pakistan are carried out by youngsters under the age of 30, with a more prominent occurrence among women than among men. The rate of suicide is further elevated among married women, outperforming the rates among both single men and women.

It is interesting to note that this contradicts the results from Western countries where marriage has been shown to be a protective factor against suicide. For women in Pakistan, marital conflicts and family structures are clear stressors and significant sources of psychological pressure.[2,8]

With the awareness that poverty and stressful economic conditions can further impact the suicide rate, an emphasis on traumatic interpersonal relationships and psychiatric illnesses, especially depression, becomes even more crucial.[15]

The criminalization of attempted suicidal conduct is also one of the main reasons that individuals do not seek help for mental health issues which may have encouraged the act. Many people who attempt suicide may already be experiencing the ill-effects of a psychological issue, such as burdensome confusion, while the attempt usually gets encouraged due to relational challenges or other unpleasant factors. It should be noted that most mental health issues, including depression, are treatable. Many people who end their life tend to have attempted self-harm in the past as well, which should be brought to clinical consideration.

In Islam, suicide is viewed as a transgression to the sacredness of human life. Since Pakistani law takes influence from Islamic tenets, suicidal conduct and suicidal attempts are viewed as criminal offences under the law and subject to fines as well as detainment. Owing to the social taboos surrounding suicide, such conduct is often underreported in Pakistan when in all essence it should be explored further at an institutional and national level so it can be prevented instead of punished strictly.

In the matter of attempted suicide, the issue of ascertaining the ‘intent’ of an individual becomes vital in order to arraign the individual and apply criminal charges. Intent is not always easily determined and Islam also holds strong views against assuming people’s intentions.

In attempted suicide cases, the standard of ‘insanity’ also becomes relevant according to Islam, whereby an intellectually upset individual is not meant to be answerable for his or her acts.

For these reasons, the criminalization of attempted suicide in most Muslim-majority nations can be challenged.

Legal Implications of Suicide in Pakistan

Suicide and attempted suicide are viewed as criminal offences under Section 325 of the Pakistan Penal Code, punishable with imprisonment which may extend to one year, or fine of up to PKR 10,000, or both.[8,16] By law, suicide and attempted suicide should be reported to the police for further investigation. Such cases should be assessed at government-assigned medico-legal centers (MLCs) mandated to deal with forensic cases.[2,4]

Families and individuals avoid going to MLCs because of the dread of provocation, humiliation and disparagement by the police and the society. Furthermore, due to complications associated with police reporting, cases involving suicide and deliberate self-harm (DSH) are taken to private hospitals instead where they are neither addressed properly nor brought to the attention of the authorities. Consequently, the phenomenon of suicide and attempted suicide remains undiagnosed and understudied.[2,8,17] Patients must be provided with treatment for mental issues instead of being punished.[9]

In 2001, a Mental Health Ordinance (MHO) was promulgated in Pakistan to replace the “Lunacy” Act of 1912. Accordingly, since the passage of the Eighteenth Amendment which devolves the subject of health to the provinces, Sindh, Punjab and Khyber Pakhtunkhwa have enacted laws (in 2013, 2014 and 2017 respectively) to address psychological well-being.

According to Section 49 of MHO,

“An individual who attempts suicide will be surveyed by an affirmed therapist and whenever discovered to be experiencing a psychological issue will be dealt with appropriately under the arrangements of this mandate.”

To reduce the stigma around suicide and encourage the seeking of help for mental illnesses, a national campaign must be mobilized to require the decriminalization of suicide and attempted suicide. Religion can obviously prescribe profound qualities, but religion must not be misused or misquoted to strike down helpful laws or implement unfair punishments against people who are already dealing with mental health issues. Punitive standards must be cautiously utilized in the definition of domestic criminal laws.

Scientific studies further show that suicide may be a side-effect of neurobiological and hereditary interaction, in which case it may not be any different from other psychological health issues set off by distressing stimuli. This remains an under-researched area in neuropathophysiology and must be explored further. To punish patients who may be survivors of a pathophysiological illness and denounce them as lawbreakers clearly contradicts the sympathetic objective of medical care.

We urge everyone experiencing mental health issues to seek professional help. The following helplines operate in Pakistan free of cost: 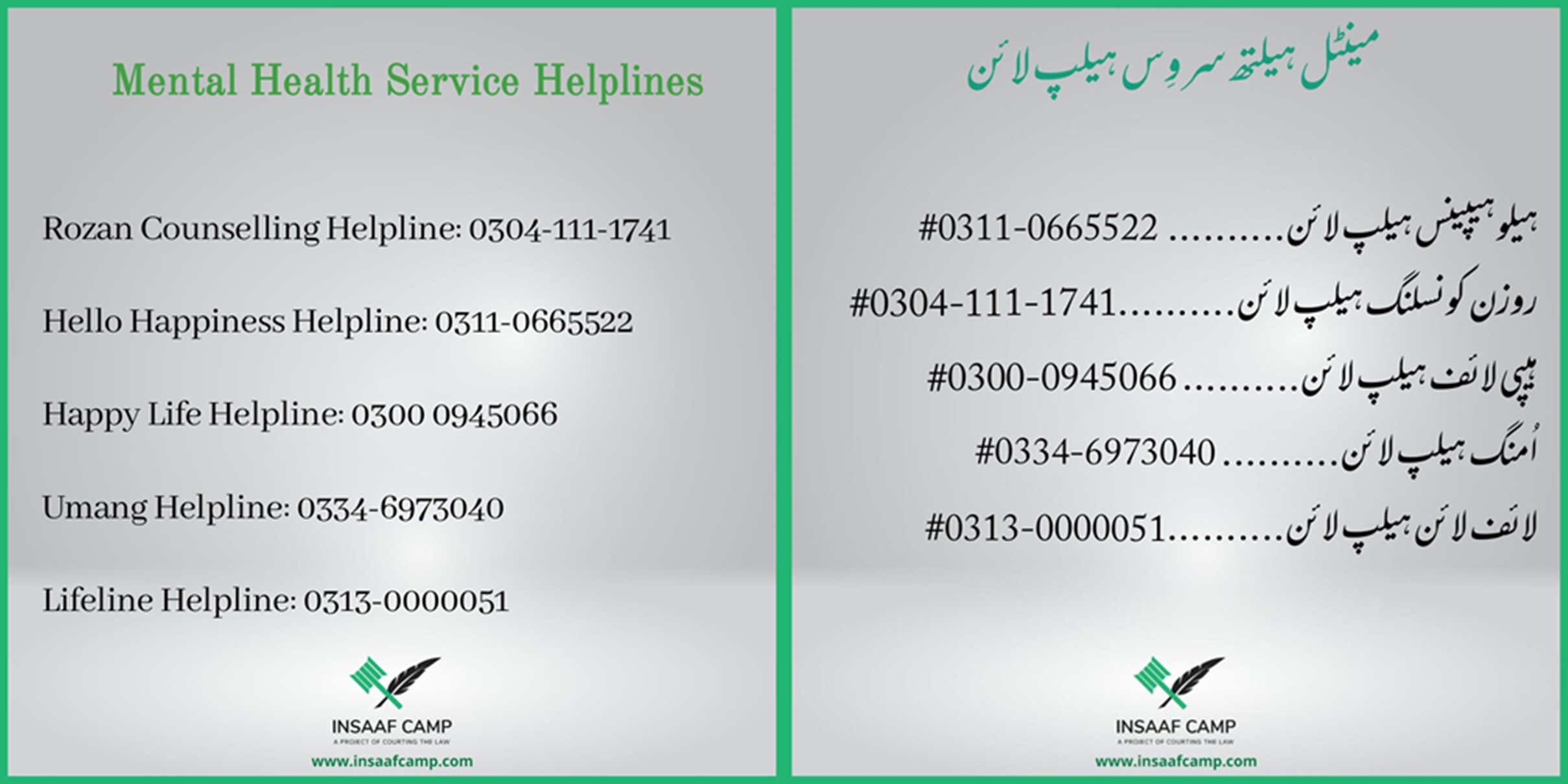 The writer is a law student at the School of International Law (SIL) and serves as the Deputy Head of the Mooting Society. She has previously interned at Saad Rasool Law Associates and has also pursued courses in commercial and corporate law from Harvard. She has keen interest in legal research and commercial litigation.

View all posts by Minahil Sikander