The ongoing Panama Case in the Supreme Court Pakistan (SCP) and the recent release of the Final Joint Investigation report on the case have drawn the nation’s attention to the vast and global nature of corruption that could potentially be carried out by Pakistani public officials affecting the taxpayer. In light of the international character of the companies and corruption involved, the article merely explores the options that the national anti-corruption body, National Accountability Bureau (NAB) has while investigating such allegations in some important jurisdictions.

Pakistan is a party to a multilateral convention that could be used to provide extradition and Mutual Legal Assistance (MLA) in corruption cases, namely, the United Nations Convention against Corruption (UNCAC). It has also signed and ratified the United Nations Convention against Transnational Organized Crime (UNTOC). Pakistan has only one bilateral Mutual Legal Assistance (MLA) treaty in force (with Kazakhstan, a member of the ADB/OECD Initiative).[i]

However, MLA and extradition are available with or without a treaty. The NAB also liaises directly with its foreign counterparts on MLA matters. The NAB does not communicate with foreign authorities in extradition cases; all communication is through the Ministries of Interior and Foreign Affairs. In corruption cases, the Overseas Wing of the NAB is a de facto central authority for incoming and outgoing MLA requests. Under s.21 of the National Accountability Ordinance, Pakistan can seek MLA from a foreign government to investigate a corruption allegation. It has done so in many cases including famously to the Swiss Authorities in 1997 for accounts allegedly holding kickbacks and bribe money for former Prime Minister Benazir Bhutto and her husband Asif Ali Zardari (also former Prime Minister).[ii]

“The NAB Chair or any officer authorized by the Federal Government may request a Foreign State to do the following acts in accordance with the law of such state:

a. have evidence taken, or documents or other articles produced;

b. obtain and execute search warrants or other lawful instruments authorizing search for things relevant to investigation or proceedings in Pakistan believed to be located in that state, and if found, seize them;

c. freeze assets, by whatever processes are lawfully available in that state, to the extent to which the assets are believed on reasonable grounds to be situated in that state;

d. confiscate articles and forfeit assets to the extent to which the articles or assets, as the case may be, are believed to be located in that state;

e. transfer to Pakistan any such evidence, documents, things, articles, assets or proceeds realized from the disposal of such articles or assets; and

f. transfer in custody to Pakistan a person detained in the foreign state who consents to assist Pakistan in the relevant investigation or proceedings.”

Pakistan does not have an extradition or MLA Treaty with the UK. However, MLA is the formal way in which countries request and provide help to each other, to obtain evidence located in one country for use in criminal investigations and prosecutions in another country. Ad hoc arrangements can be used. Pakistan can enter into ad hoc extradition arrangements with the UK to seek the extradition of a specific person. To achieve this, the UK government and the government of the state of the issuing or requesting judicial authority can mutually choose to enter into an arrangement for the extradition of that person. The ad hoc, one-off extradition arrangements in place then mirror exactly what extradition lawyers would recognise as a ‘Part 2’ request, pursuant to Part 2 of the Extradition Act 2003 (EA 2003).[iii] The Serious Fraud Office (SFO) is a designated prosecuting authority in the United Kingdom for the purposes of MLA requests. The United Kingdom Central Authority (UKCA) is part of the Home Office and deals with all MLA requests in England, Wales and Northern Ireland (except tax and fiscal customs matters).[iv]

Pakistan inherited a pre-Partition extradition treaty with the US, which was signed by the UK in 1931. Extradition treaty between the United States and the UK, signed at London on December 22, 1931, was made applicable to the Indian subcontinent in accordance with the provisions of article 14, from March 9, 1942.[v] Article 3 (22) includes offering, receiving or giving bribery as an offence applicable for extradition. The US Securities Exchange Commission (SEC) was among the first securities regulators to receive the legal authority to assist foreign counterparts in investigations of securities fraud. Today, the SEC can assist foreign securities authorities in their investigations using a variety of tools, including exercising the SEC’s compulsory powers to obtain documents and testimony, subject to the governing rules.[vi]

Mutual Assistance in Criminal Matters Act 1987 regulates the provision, obtaining and offering of international assistance in criminal matters. Australia’s International Crime Cooperation Central Authority (ICCCA) is responsible for all casework and related policy advice related to MLA. Amongst other crimes, it aims to assist foreign countries such as Pakistan in tackling corruption. Australia can provide and request a broad range of assistance to and from foreign countries. Examples of mutual assistance include: executing search warrants to obtain evidence such as bank records from financial institutions, taking evidence from a witness in Australia for foreign criminal proceedings, arranging for witnesses to travel with their consent to a foreign country to give evidence in foreign criminal proceedings, etcetera.[vii]

The diagram below provides an overview of the process of making a mutual assistance request to Australia. 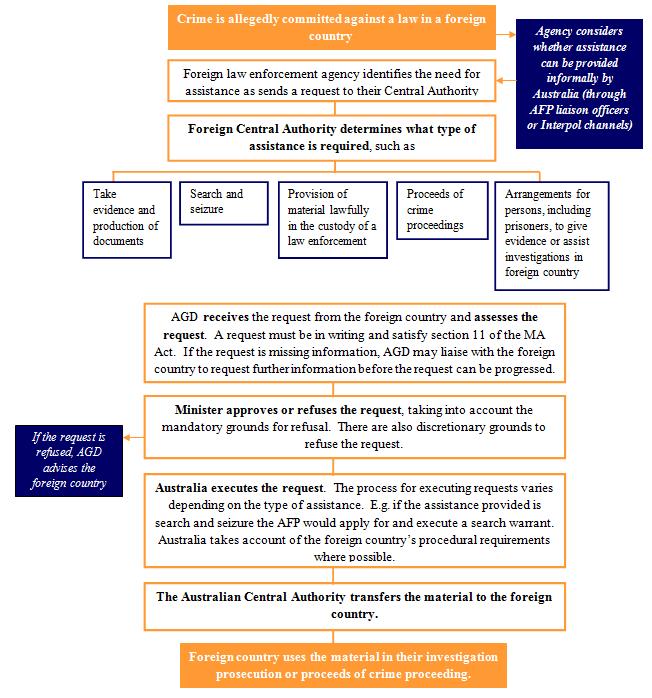 The Mutual Legal Assistance in Criminal Matters Act gives Canada the legal authority to obtain court orders on behalf of countries that are parties to mutual legal assistance agreements with Canada. These include bilateral treaties and multilateral conventions containing provisions for MLA. In general, to obtain court-ordered assistance under the Mutual Legal Assistance in Criminal Matters Act, the request must establish reasonable grounds to believe that, an offence has been committed; and evidence of the commission of the offence, or information that may reveal the whereabouts of a suspect, will be found in Canada.

This requires a clear connection between the foreign investigation and the Canadian evidence sought. This does not apply to Pakistan, as the two countries have no MLA Treaty. However, the Mutual Legal Assistance in Criminal Matters Act permits Canada to enter into a time-limited administrative arrangement with a non-treaty country to respond to a request for court-ordered assistance.

More limited types of assistance are available to countries that are not party to a mutual legal assistance agreement with Canada. Under the Canada Evidence Act, orders compelling witnesses to give evidence (including via video-link) and to produce records can be issued at the request of a foreign state. However, this avenue of cooperation requires that two essential conditions be met: firstly, the request must be made by a judge, court or tribunal in the requesting country (letters rogatory); and secondly, the criminal matter for which the assistance is sought must be pending before the foreign judge, court or tribunal.

In addition, to the extent possible, Canada will also execute non-treaty requests for assistance made by foreign police and prosecutors where the assistance needed may be provided on a voluntary basis (e.g. taking voluntary statements from persons; obtaining publicly available documents; or serving documents).[viii]

In 2002, the International Organization of Securities Commissions (IOSCO) created a Multilateral Memorandum of Understanding (MMOU), the first global multilateral information-sharing arrangement among securities regulators. Pursuant to the MMOU, signatories agree, among other items, to provide certain critical information, to permit the use of that information in civil or administrative proceedings, to share information onward with self-regulatory organizations and criminal authorities, and to keep such information confidential. In particular, the MMOU provides for the following:

Pakistan is an Affiliate Member of IOSCO.[ix] Although Memorandum of Understanding (MOU) and MMOU facilitate enforcement cooperation, such arrangements are not a prerequisite for the SEC to cooperate with foreign authorities regarding enforcement matters. The SEC also has cooperated on an ad hoc basis with foreign regulators.[x]

[i] ADB/OECD Anti-Corruption Initiative for Asia and the Pacific (2007) ‘MUTUAL LEGAL ASSISTANCE, EXTRADITION AND RECOVERY OF PROCEEDS OF CORRUPTION IN ASIA AND THE PACIFIC Frameworks and Practices in 27 Asian and Pacific Jurisdictions’ http://www.oecd.org/site/adboecdanti-corruptioninitiative/37900503.pdf [3 Jul 2017]

[v] United States Department of State Treaties in Force A List of Treaties and Other International Agreements of the United States in Force on January 1, 2016 https://www.state.gov/documents/organization/267489.pdf/ [3 Jul 2017]

The writer has obtained a law degree (LL.B hons) from University of London and M.A from Coventry University and is currently a candidate for LL.M at Kings College London. She is an Attorney at Law admitted to the Lahore High Court and enrolled in the Punjab and Lahore Bar Association. She has previously been an associate at Raza Kazim Legal Consultants and Attorneys and has also worked and interned at the Office of the Advocate General Punjab and Curtis, Mallet-Prevost, Colt & Mosle LLP (London).

View all posts by Fatima A Malik

RT @ZafarSahi: So what's the point? No contempt proceedings should be initiated against a lawyer no matter what he does? Whenever it happen… about 14 hours ago
RT @chughtae: Lahore High Court at Lahore after announcement of Strike against conviction of a Member Punjab Bar Council on indictment of C… about 14 hours ago
RT @taimur_malik: As Patron of @ygapakistan I am delighted to see a full house at Ali Institute Lahore today with many excellent panel disc… about 1 day ago
RT @InsaafCamp: No woman in police custody shall be lodged even for a night in a police station except under unavoidable circumstances. S… about 2 days ago
RT @pja_lahore: Concluding Ceremony of General Training Program (GTP) 2019-20 for Additional District & Sessions Judges (Batch 19-A). Dated… about 6 days ago