Ahmedi community has been suffering the wrath of the religious zealots in Pakistan and unfortunately they are now being persecuted and threatened in western countries also. Most recently on 24th March 2016, a member of the Ahmediya community, Asad Shah, a beloved shopkeeper, was found stabbed and fatally wounded near his store in the Shawlands area of Glasgow. He was later pronounced dead on arrival at the hospital. Hours before his murder Mr Shah had posted Easter greetings on his Facebook page stating “Very happy Easter especially to my beloved Christian nation! Bismillah let’s follow the real footsteps of beloved Holy Jesus Christ (PBUH) and get the real success in both worlds”.

Khatme Nabuwatt, an organization that has taken upon itself to guard the ideology of finality of prophethood, has congratulated all Muslims on the murder. The Facebook page of the organization contains a gloating message on the cold bloodied murder of Mr Asad. The messages contains a link to a news story about the killing saying “Congratulations to all Muslims”. The closed Facebook group  is strongly against this sect of Islam. The social media page has more than 13,000 members and incites sectarian hatred. 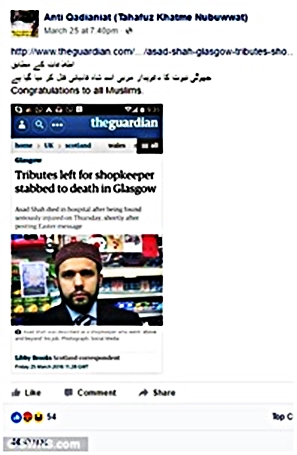 The sickening message celebrating the murder of a human being was liked 54 times which speaks volumes about the sadistic state of mind of the followers of the organization.

According to police investigators the murderers had already left for Glasgow before Mr Asad posted the greeting on Facebook. Mr Asad’s Youtube videos where he preached on religious issues and spoke against extremism, are cited to be the real reason behind his murder.

The hate crime against the Ahmedi community spiraled out of control starting  in the 1970 when they were declared non Muslims. Resultantly the headquarter of the community was shifted from Pakistan to Britain in the 1980s and is currently based in Morden, South London. The fact that the murder has taken place in a western state underpins the sad reality that sectarian violence is no longer confined to conservative states and has now spread its tentacles to countries allowing asylum and a safe refuge to the beleaguered community. The murder was indeed a message to the Ahmedi community that they are not safe wherever in the world they may be.

The connotation of hate against the community lies in the fact that they are peace loving and dispel extremism and hatred. The orthodox clergy branding its own version of Islam that has recently started an agitation allegedly against the hanging of Mumtaz Qadri – the self professed murderer of ex-Governor of Punjab – is now staging a sit-in in front of the Parliament in the federal capital Islamabad. Amongst the 10 point charter of demands presented to the media is a demand that “all Ahmedis should be expelled from the country and that all Ahmedis working in government departments should be terminated from service”. The protesters have refused to end the protest till their demands are met.

Pakistani authorities have so far shown no political interest in curbing the activities of the groups. The hate speech on Pakistani media against the Ahmedis largely goes unnoticed by Pakistan Electronic Media Regulatory Authority (PEMRA). The trend of violence is deliberately allowed to spiral out of control making it difficult for the beleaguered Ahmedis to live in Pakistan. The violence has now become imminent in foreign western countries as well due to the negligence of the Pakistani authorities who continue to allow religious zealots to spew hatred.

A few days ago before Asad Shah’s murder, the Imam of the Grand Central Mosque in Glasgow (Scotland’s biggest mosque) was caught posting message on the internet praising the Muslim extremist who murdered Pakistani Governor Salman Taseer for opposing blasphemy laws. The mufti was the most prominent figure and is followed and respected by many Muslims of the area. The religious zealotry has cost many innocents their lives yet the Islamic state of Pakistan refuses to acknowledge its role in curbing sectarian violence.

The utter disregard of the rule of law and complete impunity to the LEA is a recipe for disaster for Pakistan’s minority who despite having the constitutional guarantee of state protection are left to fend for themselves. Since its inception, Pakistan has been battling a religious existential fight with itself. A country attained in the name of religion is yet to establish the definition of a Muslim. A sunni Muslim Punjabi male is what best conforms to the state ideology and orthodox theology. No longer a silent spectator in systematic and continuous religious persecution, the state has now become an active abettor. The judiciary also appears complacent and meek in the face religious fundamentalism and orthodox clergy who are bent on enforcing and implementing the firebrand version of wahabism (a religious movement to restore Islam to its original form).

Years of institutionalized discrimination against the Ahmediya community and its persistent vilification have led to extreme apathy, where even the mass murder of Ahmedis in Lahore on 28th May, 2010 failed to elicit any kind of public outrage. The murder of an Ahmedi is in fact praised and encouraged by so-called guardians of Islam, the murderer is extolled and revered. In a country where murderers are celebrated while an Ahmedi Nobel Prize winner like Dr Abdus Salam is vilified, it is only natural that the country shall forever remain divided on religious lines and these fault lines get deeper with each passing day.

Javeria Younes is an advocate and social activist vying for an egalitarian society free from torture.

View all posts by Javeria Younes

RT @raoaliibrahim: However for Overseas Pakistanis, Rule 84 of the Election Rules provides for an iVoting Mechanism which requires them to… about 20 mins ago
RT @raoaliibrahim: Due to lack of publicly available information on the Right to Vote for Overseas Pakistanis, we are pleased to publish th… about 49 mins ago
RT @maryamsalman226: At the Conference on judicial perspective on domestic and international arbitration in Pakistan https://t.co/58CisAw2zU about 2 hours ago
RT @maryamsalman226: With @taimur_malik and Mahnaz Malik https://t.co/iHiUZThnO4 about 2 hours ago
RT @SyedAliZafar1: A new law of NAB has been brought in which was passed in a matter of minutes without any deliberation or discussion. The… about 2 hours ago