Claustrophobic Courtrooms, Broken Benches and Tattered Toilets: How Our Abysmal Judicial Infrastructure is Contributing to the Delay of Justice

The judiciary is thought to be one of the most powerful institutions in our country as it is a body responsible for deciding the collective destiny of over 21 crore people who are diverse in many respects, yet united under a democratic Constitution. But more often than not, an ordinary citizen would not want to peruse justice because of ‘the system’.

A number of concerns hover over a litigant regarding judicial efficiency. These concerns vary in nature, from inordinate delays in the hearing of case to time-consuming trials which stretch over decades in some cases, leading to hesitancy in the pursuit of justice. Countless orphan children, women and elderly are being forced to run from pillar to post for decades to seek solace. Adding to their troubles, the judicial infrastructure is in shambles. With basic facilities and amenities almost non-existent in the premises these litigants have got nothing to rejoice or look forward to. Besides other loopholes in the deliverance of judicial services, litigants have to deal with the absence of even the very basic facilities, which leads to dissatisfaction and resentment against the state.

For those who have been lucky in not having to visit court premises, the picture below depicts what an average washroom in the premises looks like. A large faction of people visiting the courts to seek justice often have to suffer a great deal of inconvenience due to very few functioning toilets. Even where they have been built, many are still not being used for not being connected to clean water and sewerage systems. The lack of access to clean toilets and sanitation is a big problem for litigants visiting from other cities, especially for the women. There is an urgent need for adequate and well-maintained water supply and hygiene facilities, including proper toilets, hand washing basins, soaps and sanitizers. 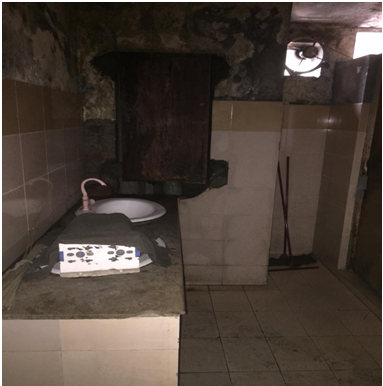 In the following picture, you can see that a drinking water cooler that has been placed in a dirty washroom. It is alarming to see such unhygienic practices being carried out without raising eyebrows.Unsafe water, poor hygiene practices and inadequate sanitation are the causes of continued high incidences of diarrhea diseases and other highly contagious illnesses. Judicial staff, lawyers and litigants have to face a great deal of difficulty in trying to find clean drinking water in the scorching heat of Lahore. Those who can afford are left with no other option but to buy expensive bottled water. It is crucial that we are at least provided with clean drinking water in judicial bounds by the state. 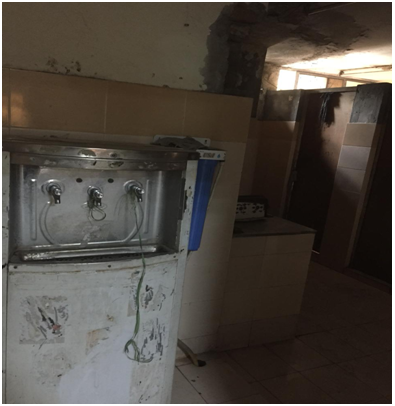 More difficulties faced by all due to the inadequate infrastructure include the claustrophobic and small courtrooms and corridors with no ventilation, as a result of which litigants – as well as courtroom staff – are exposed to hot and humid conditions. Often times, poor ventilation leads to an extreme temperature, which causes fatigue and discomfort. Excessive and irritating odors also contribute towards airborne diseases. Such atmosphere and harsh working conditions make it very difficult and discomforting for people to concentrate for long periods of time and without any distraction, hence reducing the overall efficiency of our judicial system.

Excessive heat and dust build-up also negatively impact the performance of machines and equipment, which further decreases productivity. Poor ventilation confines interior air which results in the build-up of a chemical and biological contaminant that enhances the spread of transmittable diseases and airborne viruses, thus increasing the spread of sickness.

Installing turbine ventilators on the roofs of courtrooms and corridors can be the cheapest and most efficient way to ensure adequate ventilation. It sucks up contaminated and polluted air and circulates cool and fresh air from the outside.

Furthermore, judicial premises are devoid of seating arrangements that can help people rest their legs even for a moment. Consequently, older people and people with disabilities try not to visit courts. Either they do not pursue justice at all or prefer leaving the matter in the hands of their lawyers. Court proceedings are further delayed when witnesses and other people connected to the case are not willing to visit the court due to such terrible conditions. Lawyers are forced to ask for adjournments and it is rare to find a judge taking strict measures against adjournments. 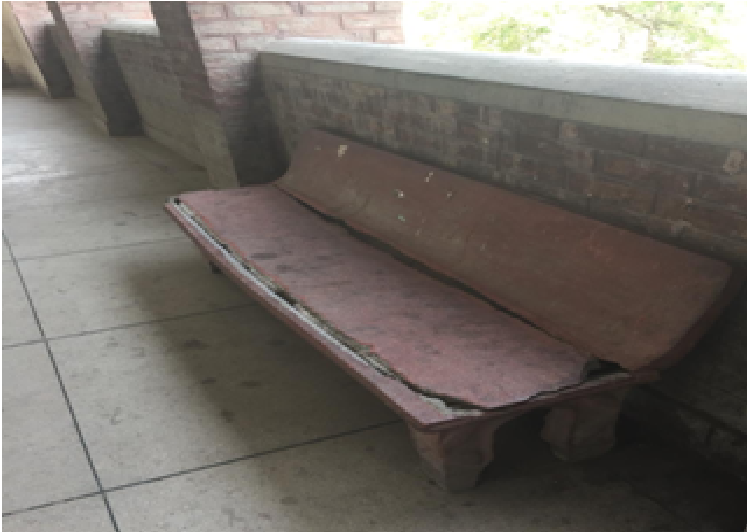 In places where public seating exists, it is often broken or is very narrow and uncomfortable, making it difficult to sit. As a result, people are often forced to adapt to the situation in their own ways. Sometimes they simply give up and at other times they are forced to sit on their briefcases or on the stairways. Proper arrangements need to be made for the old and disabled.A water bottle hanging from the door of a civil court can be seen in the image below to make up for the non-existent door-stopper. It can also be seen that the door-knob is broken. 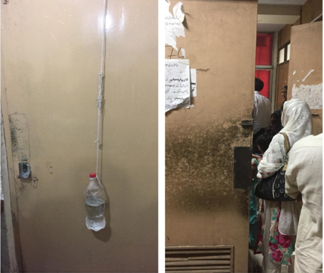 Our judicial system has hundreds of issues ranging from its time-consuming trials to being understaffed and having loopholes that only the rich and elite can exploit.

According to a report published by the Law and Justice Commission of Pakistan, more than 1.87 million cases are pending in the courts of Pakistan. Such a backlog in the judicial system not only results in the delay of justice but also the lack of accessibility to justice for an average citizen. It is about time we understand how crucial it is to solve this crisis before it turns into a greater mess. Revolutionary steps need to be taken in order to restore a citizen’s faith in legal system. Attention needs to be drawn towards the absence of basic facilities in court premises. Although it is the government’s responsibility to provide basic facilities and amenities to litigants, in the current scenario I would like to make a humble request to the Chief Justice of Pakistan to look into the matter.

Better infrastructure is not only a mode of enhancing judicial efficiency, it also provides comfort to litigants who are being persecuted by inordinate judicial delays.

The writer is a Barrister and works as a Junior Associate at Ahmer Bilal Soofi and Co, Lahore.

View all posts by Yousaf Gillani

RT @FaheemAhmadAdv: First female judge of the apex court of Pakistan taking oath. History in the making. More power to you #justiceayesham… about 7 hours ago
RT @chughtae: #JusticeAyeshaMalik in Cause List of Supreme Court of Pakistan - Bench No. 1 from 24th -28th Jan 2022. https://t.co/DLnMfqdk… about 7 hours ago
RT @ForeignOfficePk: 📣: Pakistan is proud of Justice #AyeshaMalik who has been elevated as first Female Supreme Court justice of #Pakistan… about 11 hours ago
RT @AsadRahim: On why parliament remains the best forum for a deeply diverse federation, and how imperial presidencies have torn it apart (… about 11 hours ago
RT @taimur_malik: Historic moment for Pakistan! Congratulations, in particular, to all #womeninlaw in the country. Our justice system doesn… about 21 hours ago